Decker is the Type C backup fighter sent to defend against the invasion of Green Orange. It is piloted by Dori.

Decker's weapon is a precision attack that shoots straight forward. Two shots will fire from Decker's autocannons (the two protruding pieces in the very front), where even turning or rotating changes the location the bullet fires from. The shots are individual shots from each other, where if one bullet collides, the other may not necessarily do so.

Decker's backshot fires a continuous stream of bullets backwards, With closer range afterburners to the back side, and a small bullet directly forward. Shots directly in the back and front will not pierce through enemies, however the afterburners will.

Being above an enemy will increase the amount of damage it will take, as the damage of every component of the attack stacks.

Decker's side shot fires directly to the side and to a 45 degree angle on each side of the ship, for a total of four individual bullets.

Being above an enemy will increase the amount of damage it will take, as each bullet is considered an individual attack.

Decker will have a lock-on reticle a certain distance in front of it. Enemies contacting the reticle will be locked on while the button is held. Up to eight targets can be locked on at a time. A target may be locked on multiple times, if the reticle remains on that target, though there is a slight cooldown to when the next lock on the same target will be.

On release of the lock-on button, all beams will fire at their intended targets. If the target is already destroyed, the beam will still fire, but go off screen. Each shot will do damage, even to the same target.

Decker will create a field in front of the ship, increasing in power as the charge button is held. The field can absorb a limitless number of bullets, and unlike Rybb's charge it does not break. As such, the charge can be used to easily avoid weaker bullets without needing to move.

When the charge button is released, a shot will fire. There are four phases to determine which shot fires: 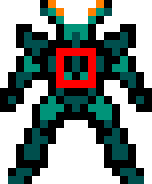 Tapping any attack button will cause Decker to sweep a large sword attack in front of the ship, reflecting many bullets based on where the bullet hit. A spark appears a moment after each slash to indicate when the player can perform this attack again. If the button is held or tapped too quickly, Decker will instead sweep faster, but the sword strike's range will be shorter and will not reflect bullets.

Decker thrusts a drill ahead, attacking enemies directly in front. The drill slows oncoming bullets, and powers up as you destroy enemies with it.

Upon destroying enough enemies, Decker's drill will grow in size. The drill will then be able to destroy enemy bullets. The drill will shrink if it has not destroyed enemies in a while, or when the attack button is released.

Retrieved from "https://zeroranger.miraheze.org/w/index.php?title=Decker&oldid=530"
Category:
Cookies help us deliver our services. By using our services, you agree to our use of cookies.